On the dusty and bumpy road, it took us one hour to get there: The Lwiro Sanctuary. A huge complex of never-ending offices of different sections kept a gloomy feeling from its old glamorous days under colonial Congo.

Officially know as CRSN (Centre de Recherches Scientifiques et Naturelles), it was built by the Belgians in the 50s and hosted a number of expatriate researchers in wildlife and scientific topics. The sanctuary section hosts primates of different kinds that abounded in the Congo basin. A part of the complex is dedicated to the most incredible exposition I ever saw and that I shall call, not without reason, ‘the museum of the dead’. (see next post)

Initially we came to visit the Lwiro sanctuary that I’ve heard about for quite some time, where 21 chimpanzees and around 15 other kinds of small primates cohabitate, not on trees in the surrounding forests, but in relatively small cages, in the hope, one day, of being reintroduced in their natural habitat.

We arrive there in the company of Liz, my colleague, who has been working in close relationship with the Center’s management and supporting them financially and morally through individuals or institutional donations that come her way. In poor rural Congo, the primates in the sanctuary are perceived as free meat rather than look-alike ancestors.

As soon as we get there we are greeted by the invariable sound of chimps lacking affection. They jump and make crazy sounds so we could notice them individually. The young ones, some of which are less than one year old, are in small cages two by two. The seven middle-aged ones (2 to 4 years old), are in a separate enclosed space where they get fed, shit, and sleep everyday. They do not go out. Six others, older in case are in a separate enclose, enduring the same conditions.

The younger ones are released to play from time to time, as they are not dangerous yet, and here they are released and wander around provoking us during the time of our visit. Two of them do not leave each other, they are the youngest, including Kam, 6 months old, who is the last ‘refugee’; they hold each other by the waist and walk slowly with their back bent, like an old couple that has endured a lot that they can only rely on each other. They seem afraid of other chimp that are buzzing around, competing for our attention and cuddles. 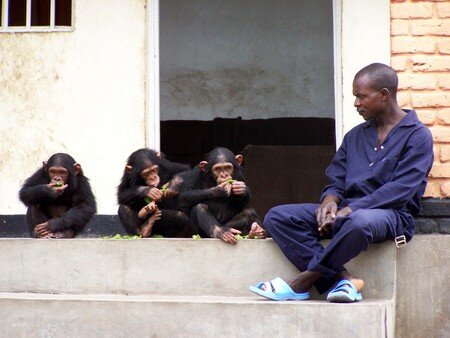